Update to the demo is coming soon, big changes on the way.

Controls have been getting a bit of an overhaul.

I added a forward dash that can be activated on forward, down + Jump button.
You can dash past opponents trying to corner you or even through projectiles if you time it right

The jump has been changed, all fighters have gotten new animations and the jump feels a lot better now.

The New Rules of The Game:

A successful hit might spawn a mutagen.
Each fighter can now upgrade special attacks by collecting Mutagens, red or yellow.
Each fighter can upgrade each super 2 times.
This means Orwell’s fireball can be upgraded to a bigger fireball (level 2) and if you collect even more to a laser attack.

You can now collect pizza and gain a little health back.

All arenas are now bigger to make fighting more tactical.
This changed the balancing of the game a lot.

I made a debug mode so I can see the colliders and what the Fighters are doing. 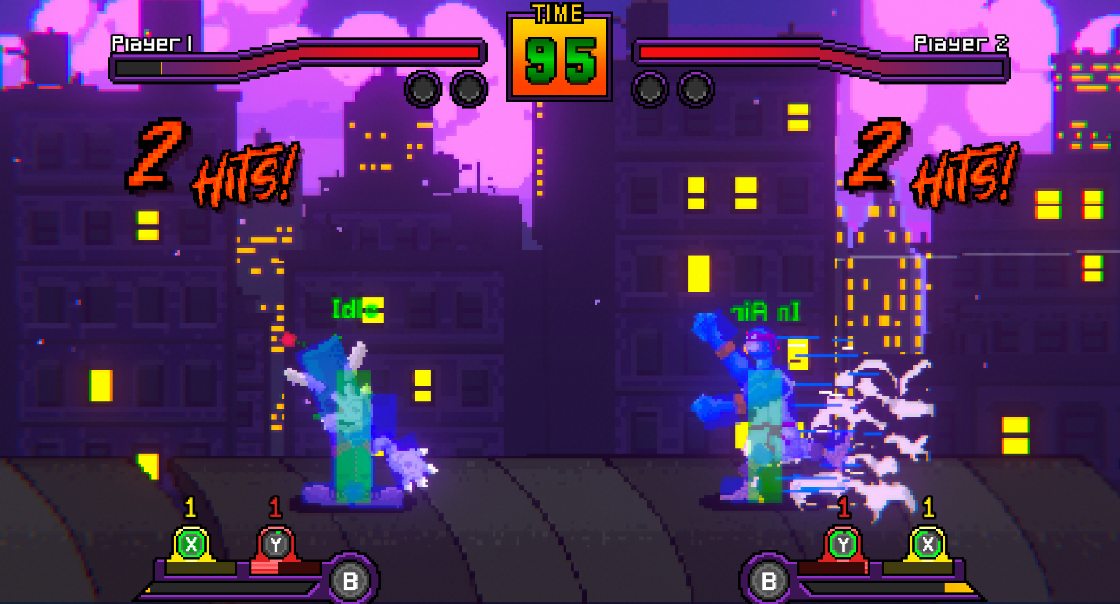 I made a new system for AI.
The new system is run by AI patterns, making it possible to program button combinations.

Which pattern that is selected is based on distance to the opponent and if the opponent is currently attacking.
Also if health is low and health items in the scene “Collect Health item” will run.
The AI will also try and look for opportunities to go for a Mutagen to level up attacks.

A hit now turns the fighter toward the hit.
There was a bug on keyboard controls on P2(number keyboard settings), keys have been changed.
Multiple collision issues have been fixed.
More balancing.

Also remember to Wishlist on steam.

MKC is a gem fighter! Play survival or fight your friends.